Viva Oaxaca Folk Art’s inception was the inspiration of Phil Saviano — importer, traveler, photographer. His love of travel propelled him to explore many parts of the world. However, his love for Mexico, its culture, and especially the people led him to found Viva Oaxaca Folk Art. With that, the talents of Mexican artisans are showcased here at vivaoaxacafolkart.com. Please read more about the company’s roots as written by Phil below.

It began as a sole proprietorship registered in the City of Boston, MA. USA. The company is now registered as Viva Oaxaca LLC and owned by Phil’s niece Deborah Saviano. We do not have a retail location, but we operate the online store at our office in Douglas, Massachusetts. Our email address is: info@vivaoaxacafolkart.com. Our credit card charges are certified and processed by Authorize.net. Our Merchant Account is with Bank of America. We also accept payments via PayPal and AmazonPay. We are a member of the Better Business Bureau with a current rating of A+. 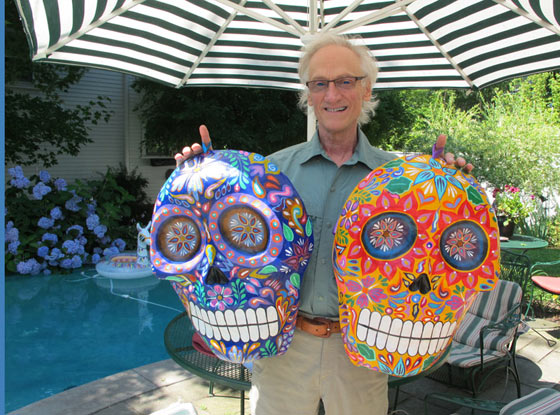 Phil Saviano launched his Viva Oaxaca Folk Art online sales business in 1999. By that point in his life, he had already been vacationing in Mexico for nearly 20 years.

His first encounter with Mexico was a trip to Cancun and Merida in 1980. He remembers being struck by how dazzling the turquoise and white beaches were in Cancun and how exotic Merida was, with its bustling market filled with short, indigenous women dressed in their handwoven huipiles and skirts. In Merida, former hemp capital of the world, he bought a tight-weave, all-cotton hammock. On subsequent trips exploring the (then) undeveloped beaches along the Caribbean and Pacific coasts, that blue and pink hammock served as both mattress and hotel room on the sugar-sand beaches south of Cancun. At Playa del Carmen, he remembers waking at sunrise to see the horizon glowing with pinks and orange, as a mother pig and her piglets splashed in the foamy surf. This was when Playa consisted of not much more than a cluster of oval-shaped thatched roof houses, a stone Mayan ruin protruding from the sand, and the boat dock for Cozumel. The arrival of the fancy hotels and sleek, white cruise ships was still a decade away.

He slung his hammock on Oaxaca state’s Pacific coast, too. At Playa Zipolite, where the 1960’s beach bum, hippie scene lasted far into the 1990s, the surf was too rough for safe swimming. But at nighttime, the moon and stars were bright enough to cast sharp shadows on the sand. The rhythmic whoosh and crashing of the waves made a soothing lullaby powered by the nature. Seeking a safer swimming spot and a more secluded setting, he eventually explored his way up the coast to Mazunte, which quickly became his favorite of all Mexico beaches. 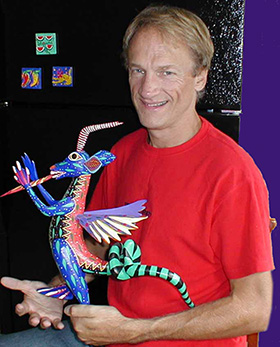 May 2001: Phil Saviano with dragon woodcarving by Arsenio Morales from village of Arrazola.

Phil’s sense of adventure, and the fact that travel through Mexico could be so inexpensive, kept him venturing back for more. It wasn’t until 1986 that he traveled away from the beaches and up over the mountains to explore Oaxaca city. He timed his visit for the Christmas week Radish Festival, his intro to Oaxaca’s exuberant festival life and the amazing creativity of the artisans that live there. A return in the early 1990s for the Day of the Dead celebration left him with more incredible memories. In Oaxaca city he found an intoxicating combination of majestic, Spanish colonial architecture, a cultural life that celebrated the music, dance, and unique cuisine carried down from many previous generations, and the creative output of the region’s folk artists. He was smitten with Oaxaca.

During these years of wandering in Mexico, Phil took photos and kept journals. They evolved into travel stories about the Yucatan’s underground cenotes, about Day of the Dead festivities in Oaxaca, and about the chocolate culinary tradition of Oaxaca. In the late 1990s, he got them published in several newspaper travel sections, including The Portland Oregonian, the Cincinnati Enquirer, and The New York Post.

All this led up to Phil’s life-turning, March 1999 visit to Oaxaca. What made this trip different was that Phil, who had been working as a freelance writer and publicist, was between projects. He was looking for ways to supplement his income, and he had discovered how to fly to Mexico quite cheaply. He made a connection with New York City’s World Courier Company. In exchange for cheap airfare, he brought a package down to Mexico City for them. He then had nine days of freedom, after which he had to take another package on a return flight back to New York. From Mexico City, he had a seven-hour bus ride south, past Puebla and the Popocatépetl volcano and down through the Sierra Madre del Sur mountains to Oaxaca. 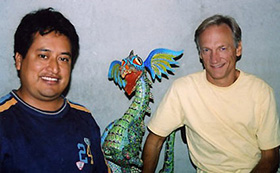 Roaming around the city, past stores displaying Oaxaca’s amazing array of colorful woodcarvings and glittering tin, he saw a business opportunity. On previous trips, his question was always “What to buy (for himself)?” This time, it was “What to buy that he can resell?” Was there a market for these cool carvings on that new website, eBay? Could it at least help pay for the trip? He took home $130 worth of wood figures, and gave eBay a trial run. Very quickly he saw the promise. Though these first carvings he posted were inexpensive, and of moderate artistic quality, every piece sold at a worthwhile profit.

Two months later, he was back on another courier flight to Mexico City. Over the next two years, he made nine trips down, each time venturing deeper into the woodcarvers’ villages of San Martin Tilcajete, Arrazola and La Unión Tejalapan Traveling alone, on a tight budget and speaking barely more than a few phrases in Spanish, Phil’s trips were a big challenge but an exciting adventure. What he lacked in conversational ability, he made up for in tenacity. He returned again and again until the artists knew he was serious about establishing a relationship with them. 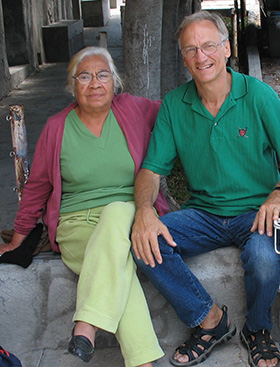 The New York City terrorist attacks of 2001 put an end to the carefree world of travel by freelance courier. Paying full-fare from that point on, Phil had to curtail his buying trips to just two a year. During this period, he studied the art of website design, eventually finding steady work running sites for non-profit organizations. Around 2003 he launched his own website, moved beyond eBay, and founded VivaOaxacaFolkArt.com.

For Phil, there is nothing like Oaxaca, but he has by now traveled many times to Puebla and Guanajuato regions, too. Although Oaxacan woodcarvings and tin remain his biggest sellers, Phil has expanded his product offerings to tin nichos, paper maché art and Huichol bead art from San Miguel de Allende and Guanajuato. From Puebla state, he carries ceramic candlesticks, candelabra and menorahs by the renowned Castillo family potters. He buys all his products directly from the artisans and workshops that make them, cutting out the middlemen so that more of the cash payment goes directly to the talented people who do the work.

Your cart is empty.

You have Successfully Subscribed!